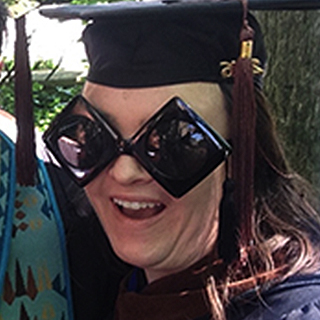 Although Asa Benally and Alexae Visel have both ended up in New York after receiving M.F.A. degrees from Yale in May, they’ve taken different paths to get there.

Asa, half-Navajo and half-Cherokee, was raised partly in the Navajo Nation in northeastern Arizona. He “dabbled in everything” at a Flagstaff arts charter school and “never realized I was a costume designer.”

“I saw myself as an awkward visual artist”: drawing or painting pictures of clothes, the ultimate niche.

A friend told him about Idyllwild Arts Academy’s Theatre Design and Production major, and his 2002-2003 postgrad year “changed my life.”

He went on to a B.F.A. in Fashion Design at Parsons School of Design, in New York. But the program was “geared more toward commerce,” whereas in theatre “art reigns supreme.”

Yale’s M.F.A. program followed four years of freelancing in both fashion design and theatre costume design while living in the Upper West Side, “where the artists live.” Now, degree in hand, he’s back in New York.

In contrast, Alexae’s post-Yale residence in New York is something new. The Idyllwild native began acting at age five in the Idyllwild Arts Summer Program. Yet later, at the Academy, “I found scene-painting way more interesting than acting.”

After her 1997 graduation and her subsequent University of Cincinnati B.F.A. in Theatre Design and Production, Alexae focused entirely on costume design, having lost interest in set design. She also returned to California, meaning the San Francisco Bay Area—”living mainly in Berkeley”—which she calls “great for live theatre.”

Taking some fashion design classes “only reminded me how much I love theatre.”

“I start with the actor and the script,” she says. “They’re my inspiration.”

Living in what may be the world capital of theatre, Alexae, like Asa, won’t lack inspiration.