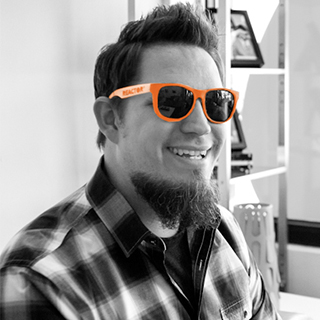 A mountain boy originally from Southern California, Clifton came to the Midwest to attend the esteemed Kansas City Art Institute. After working for several local agencies in creative roles, he founded REACTOR Design Studio. He has appeared on national television, been featured in countless publications, and guided the studio to more than two hundred design awards.
Clifton regularly speaks to companies and industry groups on topics ranging from branding to creativity to workplace culture. His philosophy that there’s no point in designing something unless it’s awesome permeates the soul of REACTOR and drives it to achieve better results for clients.

In 2012, Clifton was honored as a Rising Star by KC Business magazine and in 2015 REACTOR was named one of Kansas City’s top twenty-five small businesses, winning a 25 Under 25 award from Thinking Bigger Business Media.

Although he prefers the warmer and more consistent weather of SoCal, Clifton and his wife, Holly, have chosen to remain in Kansas City because of the vibrant creative community and the fact that it’s an amazing place to raise their three awesome kids!