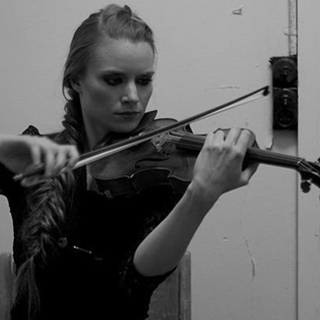 Gunvor Sihm was born in 1986 and started to play the violin at age 5 with Jan Mathiesen at Aarhus Music School. Through the years Gunvor has won several prizes, most recently the 1st prize at RDAM’s violin competition. Previously she has won a Gold medal at Berlingske Tidendes Classical Music Competition, 1st prize at Jakob Gades Violin Competition, Talent prize at “Young Classical Musicians”, 2nd prize at Oeresund’s Soloist Competition, and a Fine Arts Award from Interlochen Arts Camp in Michigan. From 2001 to 2004 Gunvor studied at Idyllwild Arts Academy in Southern California. Here she won the opportunity to perform with the Academy Symphony Orchestra and was awarded the “Sunny Brown Scholarship” as well as the schools “Outstanding Citizen Award”.

Afterwards she studied 2 years at San Francisco Conservatory of Music in the class of Ian Swensen, before she returned to Denmark and the conservatory in Copenhagen. Gunvor finished her Masters Degree in June of 2011 and was then accepted into the soloist class of the Danish Royal Music Academy (RDAM) to study with professor Serguei Azizian.

Gunvor has been to numerous masterclasses and courses in America, Italy, Japan, Ireland and Denmark and has received coachings from amongst others: Hilary Hahn, Ulf Wallin, Gerhard Schultz, Nikolaj Znaider, Odin Rathnam, Shmuel Ashkenasi, Anker Buch, Lars Bjoernkjaer, Joseph Swensen, Taras Gabora and Milan Vitek. Gunvor is currently playing on a Guarneri violin at the courtesy of Royal Danish Academy of Music.

Gunvor Sihm is a member of The Nightingale String Quartet, who just won “Young Artist of the Year” at the Gramophone Awards. Read about it here:
http://gramophone.co.uk/awards/2014/young-artist-of-the-year