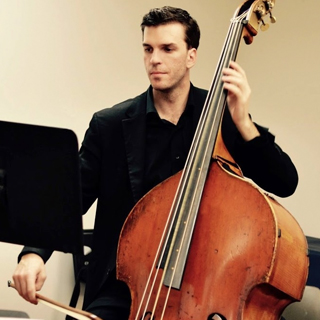 American double bassist Peter Ferretti enjoys an active career performing historical bass instruments across multiple continents. In North America, he regularly performs as a section member and principal bassist with many of the continent’s leading historically-informed ensembles, including 2018-2019 appearances with Boston’s Handel and Haydn Society, Tafelmusik Baroque Orchestra, Grand Harmonie, the Arcadia Players, and the Portland Bach Virtuosi. Since 2015, Mr. Ferretti has been a regular member of Holy Trinity Lutheran Church’s critically acclaimed Bach Vesper’s series, an organization focused on returning the sacred music of J. S. Bach and his contemporaries to its intended place, the church, presenting cantatas and motets during the historic evening setting of Vespers. In 2018, Mr. Ferretti was a member of the inaugural season of Teatro Nuovo, an opera company committed to restoring focus and beauty to neglected bel-canto masterworks in the setting of a historically-informed opera setup.

In Europe, Mr. Ferretti enjoys an ongoing performance relationship with Jakob Lehmann’s Eroica Berlin, the Monteverdi Festival Orchestra and members of Accademia Bizantina, and the Basque National Orchestra, amongst others. In 2019 he will join Jordi Savall’s Les Concert des Nations for international tours of Beethoven’s Symphonic cycle. With his Berlin-based Violoncello/Bass duo, Duo Suonatori, he explores the intimate, informal and rhetorical nature of the sonata and duo literature of Boccherini, Sperger, Dragonetti, Vivalldi, Corelli, and so many others that were relegated to the dustbins of history. His solo CD, presenting the first complete recording of Johannes Sperger’s Sonatas for Contrabasso with Viola and Cello, will debut in 2020.

Mr. Ferretti holds a Master of Music degree from the Juilliard School, where he spent two years in the internationally-renowned, full-tuition Historical Performance department studying with Rob Nairn and Heather Miller Lardin. With Juilliard415, he appeared in concerts across the globe, most notably: a tour of the subcontinent with David Hill, the Yale Voxtet and Schola Cantorum; a bi-continental tour of Bach’s sublime masterwork, his B Minor Mass, with Ton Koopmann, in which he performed as principal bass; performances in New York’s MET Museum of Art with Jordi Savall, and concerts in Alice Tully Hall with William Christie, Monica Huggett, Kristian Bezuidenhout, Lars Ulrich Mortensen, amongst others. Mr. Ferretti also holds degrees from New England Conservatory, where he studied with Don Palma, and pursued further graduate studies with Bruce Bransby at Indiana University and Andrew Ackerman at Escola Superior de Musica de Catalunya, in Barcelona.