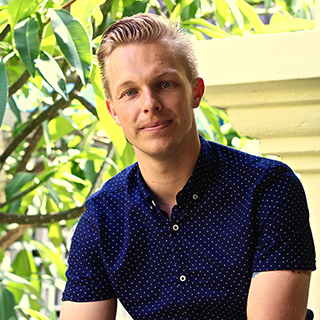 Being “passionate about education and social justice” has led James Baumann from California to Africa to South America.

The 2006 Idyllwild Arts Academy graduate in what was then called Moving Pictures was at San Francisco State University in 2013, studying Broadcast and Electronic Communication Arts. A professor mentioned a Tanzanian school that James felt he had to see.

“Tumaini Junior School”—tumaini means “hope” in Swahili—“in a town called Karatu, teaches both primary school students and older students. It turns nobody away, including orphans.”

Africa’s overcrowded classrooms often leave teachers with no choice except to lecture, but Tumaini Junior School’s insistence on student participation made it different. James documented the school’s success for his senior project.

“The film went on the festival circuit and was picked up by the Tanzania Education Corporation.”

He was busy in Tanzania, shooting the documentary in a month. His next project outside the U.S. has kept him away longer.

“In 2015, I moved to Barranquilla, Colombia. I teach English Communication, which is mainly film-based, at two different schools to children from ten to eighteen.”

James has continued making documentaries. Breaking Boundaries records the challenges faced by Barranquilla’s ambitious teachers and students. His current project, Stories of Conflict, departs from the familiar terrain of education.

“A woman I knew shocked me by saying she opposed the treaty that just ended the fifty-two-year-long civil war. How could you oppose peace? But FARC”—the Revolutionary Armed Forces of Colombia—“had kidnapped her brother seventeen years before. She still doesn’t know what happened to him. My film collects stories from people who experienced the war to give them a voice.”

This summer marks the end of James’s time in Colombia. Yet the M.A. in Strategic Communication with an Emphasis in Social Justice that he will seek from American University, in Washington, D.C., suggests that decades of encouraging the voiceless to speak lie ahead.