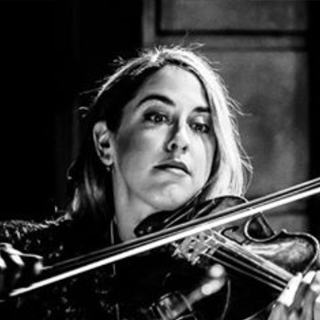 Raised in Texas and now Brooklyn Based, Jeanann Dara is a force in modern creation, collaboration and performance. She has developed her own sound with modern viola performance, improvisation and composition. Engaging sounds and manipulating the instrument with extended techniques, she pulls from her strong classical training and invites the listener to participate in the dynamic range from silence to noise and the anticipation in between.

Jeanann received her undergraduate degree from The Juilliard School where she held the position as teaching assistant and continued her education at New York University where she received her Masters degree in Multimedia Composition and New Media. She started studying with RoseLee Goldberg at NYU and began working with the Whitney Museum of American Art as a production intern/assistant in their performance division. Through her work at the Whitney she went on to work with the Whitney Biennial and PERFORMA, the performance art Biennial lead by RoseLee Goldberg. She continued as a performer but with her hands on knowledge sought to house and support artists by building, curating and producing a new multimedia space in Williamsburg, Brooklyn called La Sala. She used her almost 2 year run to accumulate a prestigious roster of artists and enjoyed presenting in a space with quadraphonic video and audio capabilities. She presented the works of artists such as Brian Chase (YYY’s) Ursala Schreer, Luke Dubois, David Linton, Phil Niblock, Dustin Wong, Lesley Flanigan, and Tristan Perich. She also was brought into the small new music venue, Spectrum, to create a series of her own curating events to combine classical and experimental musicians.

Jeanann is a sought after violist playing the works of numerous artists including work done for and with Jonny Greenwood of (Radiohead), MONO, and just recently with Max Richter at The Sydney Opera House, Australia. All this presented by Wordless Music. Soon she will be joining Bjork on stage in support of her recent release.

In 2012 she co-founded The Western Enisphere, an improvisational drone ensemble, with composer and performer David First. In her exploration of improvisation collaborations, this ensemble is comprised of specially selected players trained in the exploration of First’s concepts of Gestural Improvisation. a hypno-acoustical mix of microtonal drones, poly-rhythmic ratios, AM radio transmissions, and hallucinogenic visuals with the intention of causing a molecular transduction inside all those in attendance. She has performed with some of the finest experimental and new music artists such as Brian Chase (YYY’s), Lea Bertucci, Sam Hilmer (Z’s), Zack Layton, John King, David Linton, Jherek Bischoff, Dary John Mizelle, Spencer c Yeh, and more.

Currently she is finishing up her double EP under the name KO that includes captured improvisations and collaborative concrete recordings.

In Jeanann’s spare time she teaches privately to young violin and viola students and teaches yoga as a certified therapeutic yoga instructor.

Jeanann believes in the strength of those around her in the Community and the collaborative process. Her interests lie within the idea of growth, education and research into the creative process and its representation in society.