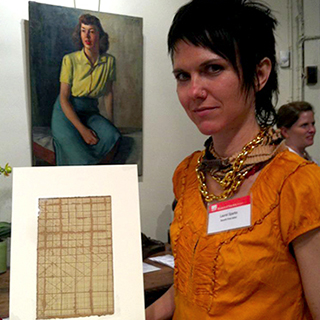 “I’m in my seventh year in the New York area, and it’s where I’ve always wanted to be. But am I established here?”

Laurel Sparks’ show of “Magic Squares” at Sarah Lawrence College, half an hour from Manhattan, would open the next day, putting her in a good mood. She had been laughing often, and now she laughed again.

The 1990 graduate of Idyllwild Arts Academy had been teaching in the Fine Arts Department at the Pratt Institute, in Brooklyn, since September. Her recent solo show at the Kate Werble Gallery, in SoHo, was a success, and she was excited about exhibiting again.

The Idyllwild Arts mission is “changing lives through the transformative power of art.” So it should come as no surprise that during her time at the Academy, Laurel was already fascinated by the transformative potential of art as magic—manifest in early cave paintings whose purpose was to ensure successful hunting.

Her “Magic Squares” paintings are more serene evocations of what drew her to the queer club scene of the nineteen-nineties: the power of dance and flamboyant costumes temporarily to “dissolve everyday boundaries” and subvert the “hierarchies of civilization.”

If the politics sound radical, Laurel’s goal is in fact to harmonize conflicting elements, not to perpetuate schisms. While politics may run the risk of simply moving boundaries and rearranging hierarchies, she sees art as having power to effect a deeper transformation. Contemplation of art’s free play liberates us from boundaries and hierarchies and brings us together, if only temporarily.

If by March 13 you find yourself in the New York area that Laurel loves, you can see how completely her “Magic Squares” achieve her ambitious purpose.