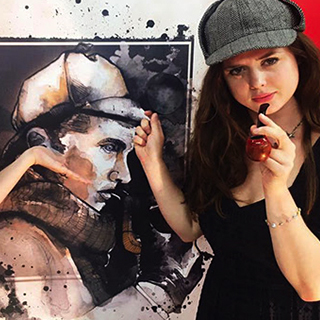 Criminal mastermind Professor James Moriarty features, directly or indirectly, in only a small fraction of Sir Arthur Conan Doyle’s fifty-six Sherlock Holmes short stories. We are fortunate. Imagine the terror if London were flooded with seemingly unsolvable crimes at the behest of the nefarious Moriarty. Would the very survival of England’s green and pleasant land be imperiled?

Rest assured that neither Holmes nor his acolytes, Lucy and Emily Keifer, would permit the unthinkable. Lucy, a 2009 Creative Writing graduate of Idyllwild Arts Academy, and her sister Emily, a 2010 Moving Pictures graduate, supply the intellectual tools for London’s salvation with their board game, Sherlock Holmes and Moriarty’s Web, available for purchase soon.

“I was already interested in the Victorian and Edwardian eras,” Lucy recalls. “Then I took Andrew Leeson’s fantastic Victorian Literature class!”

Her study of that time when the sun could never set on the British Empire, continued at Sarah Lawrence College until her 2015 graduation, led to her design of the Sherlock Holmes game. Emily did the art.

Emily’s own studies at the University of Southern California, from which she will receive her Film degree in May, kept her from taking part in the interview. Lucy reports that her sister hopes to join New Orleans’ thriving independent film scene after graduation.

As for Lucy, her abilities extend well beyond the design and marketing of ingenious board games.

“One of the things I do is ghost-write or ghost-edit novels, mostly for people who have retired from high-powered jobs and now have an idea for a book.”

One of the things?

“And I’m continuity editor for the children’s author, Cornelia Funke. I make sure, for example, that a character who appears in one of her books with blue eyes also has blue eyes in any later book.”