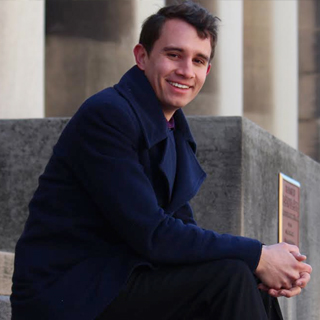 As if Idyllwild Arts Academy’s resident classical piano teachers aren’t already masterful, Michael Noble, Class of 2006, was brought back to teach a masterclass this fall.

“I’m actually more nervous about the class than about my upcoming concerts on the East Coast,” he admitted a few days before teaching.

The comparison said a lot about the confidence he has earned by performing throughout Europe, winning the 2013 Carmel Music Society Piano Competition in Carmel, California, and performing more recently in Bangkok.

Michael is nearing completion of Yale’s distinctively rigorous Doctor of Musical Arts program, which requires three to five years to build a performance portfolio after writing a thesis. In his case, that meant writing about the American Marxist composer Frederic Rzewski (b. 1938) and his goal of using classical music to engage audiences politically.

The thesis points out that “if Rzewski writes political music,” then “his main goal” should apparently “be to reach the largest possible audience,” and yet, paradoxically, he “employs avant-garde and virtuosic techniques.”

His thesis has satisfied the Yale graduate music faculty’s demand for D.M.A. candidates to demonstrate “intellectual curiosity about music and ability to discuss in depth its history, theory, styles, sources, and relationship to the other arts and to society.” Having finished writing, Michael is now a little skeptical of classical music’s power to bring about the kind of engagement that Rzewski has always sought.

But his masterclass and the subsequent performance in Stephens Recital Hall proved his ability to engage listeners in the way that classical music usually does. No one who had read the Carmel Music Society’s praise of his “exciting, but refined performances” which always called attention “to the music he was playing and not his technical prowess” was disappointed.