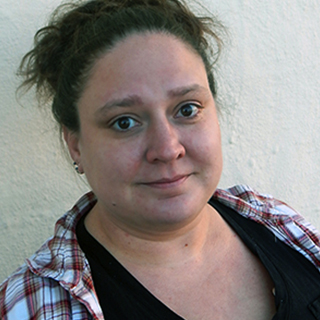 “Our building definitely looks like it was built by a bunch of hippies back in the day who didn’t hire an architect and just said, Hey, let’s have a place to put on plays.”

The building Sara Huddleston refers to houses San Francisco’s Magic Theatre. The name comes from Herman Hesse’s Steppenwolf, whose central character is invited to an “Anarchist Evening at the Magic Theatre for Madmen Only, Price of Admission: Your Mind.”

A free-wheeling, daring approach to theatre has been the Magic’s hallmark since its founding in 1967, and that approach is ideally suited to Sara’s willingness to “wear a lot of hats.”

“I absolutely love what I do,” says the 1998 Idyllwild Arts Academy graduate.

From Idyllwild she moved on to Carnegie Mellon University, in Pittsburgh, where “I got into sound design.”

While she continues to apply her expertise in sound design both for the Magic and in moonlighting gigs with other Bay Area theatres, as the Magic’s Director of Production she does what producers do. That means everything behind the scenes: developing budgets, working with designers, technical directors, and electricians on making sets, lights, and sound functional, and much more.

Theatre won’t happen if this vital work isn’t done. But as a long-dead playwright once proclaimed, “The play’s the thing,” and Sara also has a hand in choosing the plays performed at the Magic.

“Sam Shepard used to be our Playwright in Residence, and we do about five full-fledged productions per year, including some world premieres.”

The most recent world premiere, this spring, was of the Nigerian-American storyteller Mfoniso Udofia’s runboyrun, which continued her work on the epic nine-play Ufot Cycle—and proved that an evening of Magic Theatre still requires that you bring your mind.