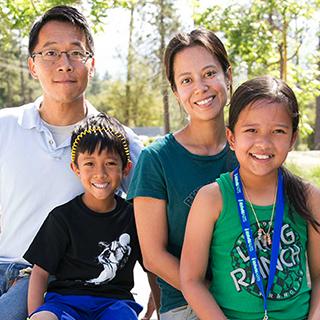 “I sound so awful when I play now that I really don’t miss it!”

Not that Sydney Guo, a 1989 Idyllwild Arts Academy graduate in Classical Violin, has allowed his hands to become idle. His medical partnership has just added two more vascular surgeons, bringing the total to five besides himself, and has offices in four California cities. The several weeks needed to pin Sydney down for an interview testify to the heavy demands on his time.

Raising two children with his wife, Aline, doesn’t leave a lot of time for violin practice, either.

But the family found time together for the Idyllwild Arts Summer Program in 2014 and again this past summer.

“This year my wife did mostly photography and my daughter Allison, who is eight, did jewelry-making, though she also went to the bear-making class and created a stuffed bear from scratch.”

And how did Sydney spend his time at the Summer Program?

“Gavin is still only six, so I mainly kept him out of trouble!”

Sydney’s modesty about his musical abilities and dedication to medicine result largely from his parents’ insistence more than twenty-five years ago that they did not want a “starving musician” on their hands. Yet he remembers that studying violin as a member of the first class to complete its entire high school education at Idyllwild Arts Academy (still called ISOMATA at the time) was “really special” and “got me interested in pursuing music.”

Pointing out that “If I can’t be the performer, I can at least be the audience,” he has made three significant gifts in support of the Idyllwild Arts mission.

He also plans to bring his family to the Summer Program every year—which should let Sydney discover new artistic interests of his own, since Gavin won’t be six forever.