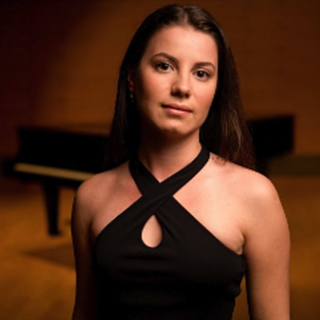 Award-winning Concert Pianist Vania Dobreva, class of 2002, joined the renowned piano faculty at the San Francisco Conservatory of Music in 2013. She is also the Founder and President of Vania Dobreva Music Schools, Piano faculty at San Francisco’s Convent and Stuart Hall Conservatory of Music and Ecole Notre Dame des Victoires. For the past twelve years, Vania has dedicated her life towards performing in Europe, Asia, the United States, and cultivating the next generation of musical talent.

Vania was born in Plovdiv, Bulgaria where she began playing the piano at the age of four and was accepted to the National Music School for Gifted Children. As a child, Vania has toured extensively in Europe and has won many prestigious competitions; including the Top Prize at the competition for Young Talents in Bulgaria and the Special Award for the Best Performance of German and Austrian Compositions of the Chairman, Prof. Walter Krafft at the National Competition for German and Austrian Music.

In 1999, Vania gave her debut recital at the world famous Gasteig Concert Hall in Munich, Germany. The same year she was invited to continue her piano studies on a full scholarship at Idyllwild Arts Academy where she studied with Dr. Douglas Ashcraft, graduating with the award “Most Outstanding Pianist.” In 2000 and 2001 after winning back to back, the “Redlands Bowl Competition for Young Artists,” the California TV station KVCR launched two interviews with Ms. Dobreva as well as broadcast her live concerts. In 2002, Vania was accepted to the San Francisco Conservatory of Music and received the Milton Salkind Piano scholarship. Vania received her Bachelor and Masters of Music degrees from the Conservatory, where she was awarded the honor of Commencement Valedictorian Speaker and received the Dean’s Award for Service. Vania has been invited to appear as a guest artist performer at the Chopin Foundation in San Francisco and has been a frequent performer at major Music Festivals including; The Varna Summer International Music Festival in Bulgaria, The Munich Musik Seminar in Germany, The Zephyr Chamber Music Festival in Italy, The Redlands Bowl Summer Music Festival and Santa Barbara’s Music Festival “Music Academy of the West.”

In 2013, Vania was appointed Member of the Board of Trustees at the Idyllwild Arts Academy and is the current Liaison of the school for Northern California.