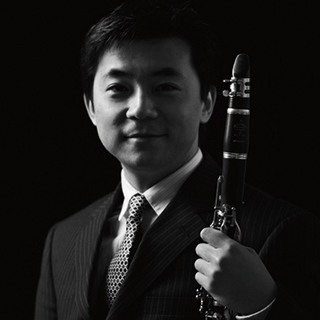 A native of TaiYuan, China, Yao Guang began his musical career at the age of three on the violin, switching to the clarinet seven years later. In 1999 he entered the China Central Conservatory, then arrived in the United States in 2003 and was accepted on full scholarship to the Idyllwild Arts Academy in Idyllwild California, studying with Mr. Yehuda Gilad , professor of the Colburn School and USC. Zhai graduated from the Curtis Institute of Music in 2009, studied with Mr. Donald Montanro, former associate principal clarinet of the Philadelphia Orchestra and Ricardo Morales current clarinet principal of the Philadelphia Orchestra.

Winner of the Hellam Competition, Aspen Music Festival Concerto Competition, the Blount-Slawson Young Artists Competition, Pacific Symphony Concerto Competition, and the Spotlight Award. As a soloist, he has played with the Shanghai Symphony ( China ) , Pacific Symphony Orchestra (CA), the Montgomery Symphony Orchestra (AL), the American Academy of Conducting Orchestra (Aspen) and the Springfield Symphony Orchestra (MO). He appeared on the National Radio show “From the Top,” the worldwide broadcast of the television program ‘Hour of Power’ with Robert Schuller at the Crystal Cathedral. He also performed by invitation at the Laguna Beach Chamber Music Festival with pianist Christopher O’Riley, BeiJing’s International Clarinet Festival, Music From Angel Fire Festival invited by Ida Kavafian. In 2009, he represented Curtis Institute of Music to tour in the US as the solo and chamber clarinetist .

He has participated music festival at Aspen Music Festival where he studied with Joaquin Valdepenas for three summers and the Pacific Music Festival ( Japan ) . Yao Guang Zhai started his career as the Principal clarinet at the Shanghai Symphony in China for two seasons .