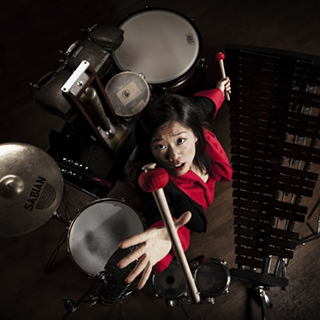 Ying-Hsueh Chen is a visionary and multi-faceted female percussionist born in Taiwan, currently enjoying a lively career in Denmark. Her musical development and experiences have been enriched with many surprises and blessings. She has recently appeared as soloist for the Austrian premiere of Unsuk Chin’s Double Concerto with Ensemble Modern Academy, conducted by Brad Lubman, as part of Klangspuren Festival in Austria.

Ying-Hsueh’s diverse musical language is influenced by her education from different parts of the world: Taiwan, USA, and Denmark. She moved to USA at age 15 and studied piano and percussion in Idyllwild Arts Academy, California. Afterwards she studied percussion with Daniel Druckman in Juilliard School, where she obtained her Bachelor of Music in 2006. She moved to Copenhagen, continuing her percussion studies with Prof. Gert Mortensen at The Royal Danish Academy of Music (DKDM), where she graduated from Master of Music with highest distinction and Soloist Class Degree, in which she finished with her innovative and outstanding Debut Concert.

Ying-Hsueh’ remarkable experiences in her 7 years in USA include her solo performance in “From the Top” -a classical broadcast program in Boston-on WQXR; she was 2nd prize winner of Spotlight Awards 2002 in the Music Center of Los Angeles; 1st prize winner at Aspen Music Marimba Competition. As a marimba soloist she played with Idyllwild Arts Academy Orchestra and Juilliard Percussion Ensemble. Her important projects include “Andsnes Project in Carnegie Hall, Saint- Louis Percussion Festival, and Focus Festival in New York, in which her chamber music performance as harpsicordist-vibraphonist of Franghiz Ali-Zadeh’s Crossing I (American Premier) was praised by New York Time’s review.

Ying-Hsueh’s career has blossomed quickly since she moved to Denmark in 2006. She won the 1st prize of Legat Koncurrence for solo instrumentalists in Royal Danish Academy of Music (DKDM) in 2009 and 3rd prize of the same competition in the previous year 2008. In 2011 she won the Nordic Music Composers Concerto Competition in DKDM, and subsequently performed Anders Koppel’s Marimba Concerto No. 1 with DKDM orchestra, conducted by Michael Schønwandt in Tivoli Koncertsal. Moreover, she has appeared as a soloist with Diamanten Ensemble and Percurama Percussion Ensemble. Together with Percurama she has performed in Mexico and toured in China.

Ying-Hsueh joined Trio ZOOM in 2008. Together they have flourished extensively both in Denmark and abroad, including a performance in Grand hall in Moscow, and a series of concerts in Probaltica Music Festival in Poland. They have also appeared in the Gala Concert of International Competition of Contemporary Chamber Music in Krakow.

Ying-Hsueh passionately promotes Danish new music and works closely with living composers. She has collaborated extensively with the Danish composer group Dygong. She has also worked with Danish contemporary ensembles such as Athelas Sinfonietta, Ensemble Lydenskab, and Scenatet. Her performances has been broadcasted in Danish Radio and TV program. She has premiered works by Danish composers in contemporary festivals such as Sound Around Festival, Wundergrund Festival, Nordic Music Days, Klang Festival, and Spor Festival.