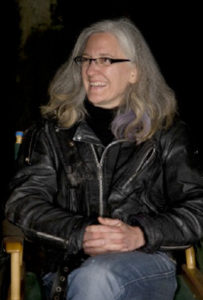 Bringing only a pen and paper to record Annette Haywood-Carter’s thoughts had been a bad idea. Interviewing the old-school way requires frequent stops, but Annette’s enthusiasm for her job swept her along like an express train. She had just finished her second year as Chair of Idyllwild Arts Academy’s Film & Digital Media Department.

“Being two hours from Los Angeles sets us apart,” she said. “And personal relations make all kinds of opportunities possible for the students.”

She meant her own relations with prominent filmmakers and actors. Born in Mississippi and raised in Macon, Georgia, she began her Hollywood career in the 1980’s, as script supervisor on dozens of big-budget films, including Driving Miss Daisy, Die Hard 2: Die Harder, Cliffhanger, and The Flintstones. After a number of the celebrated producers who worked with Annette supported her ambition to direct, she made her debut in 1994 with The Foot Shooting Party, in which she directed Leonardo DiCaprio.

Steven Spielberg took notice and invited her to direct an episode of the NBC science-fiction series, SeaQuest DSV. In 1996 came Foxfire, based on Joyce Carol Oates’ novel, Foxfire: Confessions of a Girl Gang. Annette’s direction of a then-unknown Angelina Jolie as the rebellious Margaret “Legs” Sadovsky is often credited with launching Jolie’s career.

Annette’s decision to raise her children close to her Georgia home led to several years of teaching in the Film and Television program at Savannah College of Art and Design. One fruit of her stint there was time to research the legend of Ward Allen, the elusive “Buffalo Bill of the Savannah River,” who vanished beneath its waters in 1927. She resigned her teaching job to direct Jim Caviezel, Chiwetel Ejiofor, and Sam Shepard in a script she co-authored, and Savannah was released in 2013.

For the third time during the interview, she changed her position in the overstuffed chair in the Academy’s Admission Office. But the pleasure of the chair couldn’t equal her pleasure in talking about the school’s Film & Digital Media Department.

“The term ‘digital media’ covers everything that’s going on—digital media is where the present is.”

Her excitement brought her, literally, to the edge of her chair.
“A lot of new equipment purchases have been made so that our students can always take advantage of the latest developments. For example, we’ve added Moving Magic production software and AVID editing.”
She changed her position again.
“Did I already mention that we’ve put in a film-scoring program?”
She probably had, since the old pen-and-paper way of taking notes could have missed half of what she’d said. But Annette’s creative mind seemed to move at the ideal supersonic speed for the film-loving teenagers she teaches: just fast enough to stay a step ahead of them, and therefore lead them to the far reaches of their artistic potential.