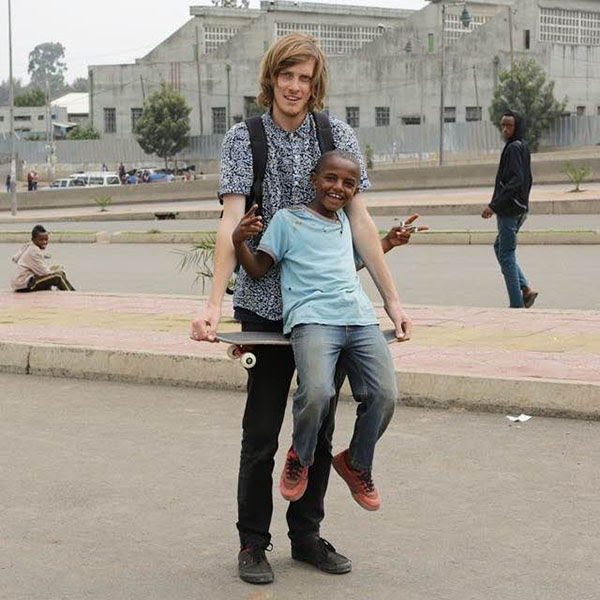 “More and more roads here are suitable for skateboarding now.”

The sleek roads that Chinese companies are building in Ethiopia—the East African country with annual economic growth surpassing ten percent—aren’t meant for skateboarders. But a lot of Ethiopian teenagers are repurposing those roads, and Sean Stromsoe, a 2009 graduate of Idyllwild Arts Academy, enjoys feeding their passion.

To see young Ethiopians devoted to skateboarding is a refreshing reminder that even in poor countries there’s more to life than worrying about how to get enough to eat or obtain medicine. Yet the project that took Sean there for the first time, in 2011, was precisely about medical care.

He had majored in Film, which was called Moving Pictures by the Academy at the time. The department had formed a connection with the nonprofit Tropical Health Alliance Foundation, based in Loma Linda, California. One of the teachers, Ira Abrams (since retired), chaperoned three of his students to a remote village where the foundation was offering free dental care, and Sean joined them to help film the work.

Being in Ethiopia was rewarding enough to bring him back “about a dozen” times—he’s lost count—and now he divides his time between the capital, Addis Ababa, and his home town of Cambria, California.

Sean has filmed music videos and commercials in addition to documenting Ethiopia’s growing skateboard culture. It’s far from home, but he loves it. With friends, he rents a house “smack-dab in the middle of Addis Ababa,” where they pay $750 per month and don’t need a car.

That truly sounds like a long way from Southern California.